Start a Wiki
Anna Is a Roleplay Character of Dlrgirl75 .

Anna is more daring than graceful and, at times, can act before she thinks. But she’s also the most optimistic and caring person you’ll ever meet. She longs to reconnect with her sister, Elsa, as they were close during their childhood. When Elsa accidentally unleashes a magical secret that locks the kingdom of Arendelle in an eternal winter, Anna embarks on a dangerous adventure to make things right. Armed with only her fearlessness, a never-give-up attitude and her faith in others, Anna is determined to save both her kingdom and her family.

According to most of the pictures of Anna she is a beautiful young girl with large light blue eyes, honey-blonde hair tied in two pigtail braids, and is very fair with a slight blush and light dusting of freckles (a trait she shares with her sister, Elsa the Snow Queen). She also has a slender figure.

Her signature dress consists of a black top with light blue sleeves and a magenta cape. Her bottom is dark blue, of medium length. She also wears black boots. In most of the pictures, she is seen wearing a violet cap. It's unknown whether this is a cap or a part of her magenta cape. 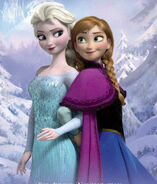 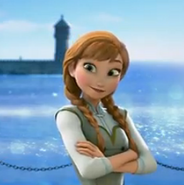 Add a photo to this gallery
Retrieved from "https://the-disney-roleplay.fandom.com/wiki/Anna_(Frozen)?oldid=9955"
Community content is available under CC-BY-SA unless otherwise noted.